Preaching the Gospel in the Nations of Africa

A little bit about us

Roger and Shireen West are a husband and wife team, who live in Nanyuki, Kenya, and, from there, take the Gospel to the Nations of Africa. We love Jesus with all our Hearts, Minds, Strength and Soul. We have a burning desire to see the whole of Saved and washed by the precious blood of Jesus. We have been established as a ministry since 1993 and will continue to serve the Lord faithfully here in Africa until our Savior calls us Home!

Our Journey with Jesus

The ministry began in a simple way by conducting ‘Catch The Fire Conferences’ throughout the country. These conferences later developed into Gospel Crusades, as Roger and Shireen travelled with a small team and a 3,000-seater tent throughout the length and breadth of Kenya.

It was not long before the tent proved to be too small for the crowds of Gospel-hungry souls, and so the team resorted to open-air evangelism. With experience and encouragement, the Gospel Crusades pushed northwards from Kenya into the 10/40 window of Gospel barrenness.

It is the desire of Roger & Shireen to see Central and North Africa saved and washed in the blood of Jesus.

Shireen was a “Cordon Bleu”, Prue Leith trained chef in London and she had established a very successful catering business catering for the rich and famous of North and Central London! She once catered for Lord and Lady…

Roger is an increibly tallented and gifted sound engineer. In his early days he worked freelance and even had his own disco – then God convicted Him to use his tallents to serve the Lord where her served Reinhard Bonnke as….

The first time Roger saw Shireen, who had come out to serve CFAN short term, the Lord told him “this is your wife”. A few months later they where married and now 25 years later they love each other more than ever…

Preaching the Gospel of the Kingdom of God in the Nations of Africa with a focus on East & Central Africa – DRC, Brazzaville Congo, Kenya…

We would really love to hear from you Email  us

The vision and focus for Revival Fire Ministries is for ‘Africa to be Saved’ especially North Africa – with the specific aim of reaching the un-reached with the Gospel. This will be achieved by:

Preaching as clearly and as simply as possible that people must repent, and be born again. This is the primary thrust of the ministry. Preaching, teaching, and healing the sick are all part of what we are called to do.

Teaching and preaching on the ‘Great Commission’. By stirring up and inspiring the Body of Christ to ‘make disciples’, it is our desire to see men and women raised up to do the work of the ministry.

To Whom it may Concern.

This is to state that Rev. Roger West is well known to us as a ministry and to me personally over a period of many years. We follow his ministry with great interest and are active supporters of his work in Africa. Rev. Roger West is an enthusiastic man of God who has displayed a great zeal for the salvation of souls throughout East and North Africa. His personal life is exemplary and he has a high level of integrity in all that he does.

I can recommend him as a genuine servant of God who is doing a great work. 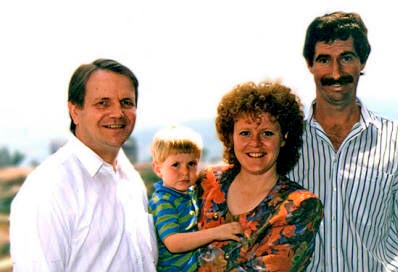 Preaching the Gospel in the Nations of Africa - Preaching as clearly and as simply as possible that people must repent, and be born again. This is the primary thrust of the ministry. Preaching, teaching, and healing the sick are all part of what we are called to do. Read more Here